Parvati Magazine: How was FIERCE founded and what is the significance of the name?

Ana Conner: Three major factors played a significant role: the hyper-policing happening throughout NYC, the gentrification of the West Village, and the impact that those factors had on queer and trans youth, especially youth of color. There was a rise in police brutality during that time, and when Amadou Diallo, a 22-year-old Guinean immigrant, was shot 41 times by the NYPD, the city’s Black and Latino communities were outraged. Many of the founders of FIERCE took to the streets, and were politicized by this moment. Parallel to this was the policing and gentrification happening in the West Village and Christopher Street Piers, where the founding members of FIERCE, as well as other queer and trans youth of color, [had] found community, family, and work. Being policed throughout the city, and pushed out of one of the only historically queer spaces in NYC, the founders decided that enough was enough, and created FIERCE in 2000 to build the leadership and power of LGBTQ youth of color in NYC. The name stands for Fabulous, Independent, Educated Radicals for Community Empowerment—we’re FIERCE!

PMAG: What does fierceness mean to you?

Karen Hall: It means being ALL of myself and being in love with me and all of my identities, which wouldn’t have been possible without FIERCE. FIERCE helped me see that I always had the beauty I’d dreamed of but couldn’t see because of my internalized racism and other internalized oppression. Being a fierce person means that despite having an awful day or year, I know I’m still fabulous and a valuable person that is worth loving. I refuse to be silent in a heteronormative/racist world, and will take up space and use my voice.

PMAG: What is the most inspiring experience you’ve had through FIERCE?

Karen: A few months ago, two FIERCE members and I co-organized a Midwest Regional Convening through FIERCE’s National Program. The convening was for queer youth of color to talk about the issues impacting their lives and strategies for change. We co-organized the convening with queer youth leaders in the Mid-West. For many months all of our meetings happened through online platforms like Google Hangouts. We’d never met face-to-face until the day before the convening. When we saw each other for the first time in person, we ran to one another and screamed, gave each other big hugs, jumped into each other’s arms and couldn’t stop making jokes for the rest of the night. We were from many different places, yet had so much in common, and had deep care, love and appreciation for one another. Because of FIERCE’s national program, I can travel to anywhere in the country and know that there is someone there who really wants to hang out with me and values me as a full person.

PMAG: What work are you most proud of?

Karen: I’m most proud of our Education for Liberation Project (ELP). ELP is like a school that creates social justice leaders by teaching LGBTQ youth of color about systems of oppression, important LGBTQ history, and how to change the world around us. The bonds I’ve built with the people that come to FIERCE through ELP have been amazing. Also I am incredibly proud of this program because there isn’t another one that’s like it in New York.

PMAG: What are some of the challenges you face as an organization and what are you doing about them, or what could others be doing to help?

Ana: As young, queer, people of color, we live at the intersection of many oppressed identities. One challenge is being able to maintain our long-term campaign work that creates access to safe public space, while also acknowledging our youth leaders experience economic hardship and housing instability, harassment and violence, as well as mental and physical health issues. One way we are balancing our day-to-day hardships, as well as maintaining sustained leadership within our campaign work, is by having a Health and Wellness Program that builds our resiliency. To learn more about our work and how to support us, visit our website and consider making a donation that goes directly to building the leadership and power of LGBTQ Youth of Color! 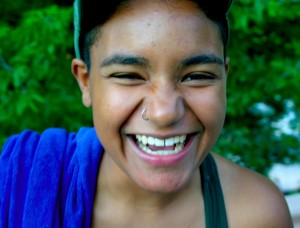 Ana Connor is an organizer and activist in NYC who thrives off community empowerment and resilience. She is interested in oral histories and radical queer movements that are grounded in racial and economic justice. Ana has been an active member at FIERCE for the past four years, and has taken up leadership in the National Program as a 2012-2013 fellow. 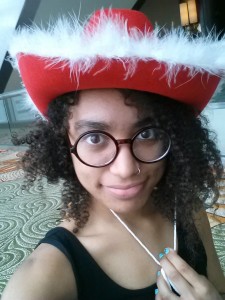 Karen Hall is a queer, youth, afro-Dominican, gender fluid, drag king, body positive, sex positive, poly, artist, opera singer and a community organizer of color who’s been an active member of FIERCE for more than three years but has been organizing since she was 14.